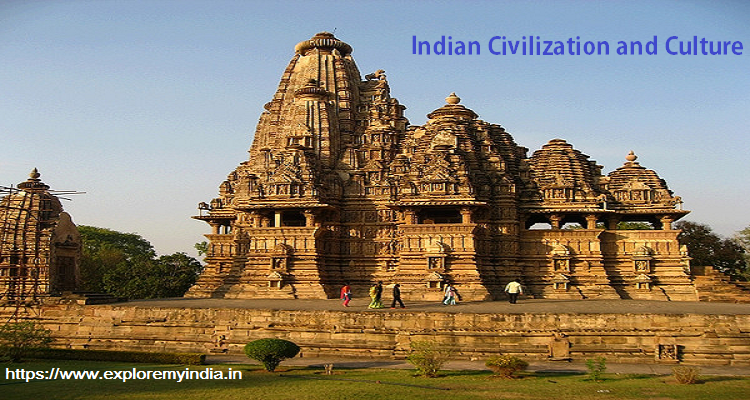 Indian Civilization and Culture: A Critical Analysis and Study

Worship of idols has always been an integral part of Hinduism. These idols denoted the wide spectrum of society. Hindus seem to worship almost anything and everything from nature. These idols are established at a serene place called Temple. A temple is always constructed by calling upon and practicing the age-old traditional scientific virtues. If you carefully examine the old temples, you will be astonished by the Facts about Indian Civilization and Culture that all these temples are constructed at magnetic waves lines of the earth, elucidating positive healing energy to its devotees. There are proper Vastu obligations which are followed while constructing a Temple. ‘Ishaan Kod’ i.e. the North East direction is said to be the best direction for a temple. If it is not possible to construct the temple in that direction than the same could be constructed in the East or North direction. It is said that if one faces these directions for worshiping the deity, he or she is exposed to a huge plethora of positive energy which imparts mental peace and healing impact on the body to keep the person healthy. There are well laid out customary practices, right from entering into the temple to the performance of puja or worship and the procedure to exit out of the temple.

Every Indian more particularly the Hindus always greet a person through a unique greeting posture called “NAMASTE”. It is indeed one of the most celebrated Facts About Indian Civilization and Culture to welcome somebody. It is the traditional way of greeting gesture in which the palms of both hands are brought together before the face or chest and the person bows down a little bit denoting the respect. Therefore “NAMASTE” literally means ‘bowing to you‘.  A detailed description of performing ‘NAMASTE’ or ‘NAMASKAR’ and its different postures are discussed in the following video.

Hospitality has always been one of the unique features of Indian Civilization and Culture. There is a saying in Sanskrit Language “Atithi Devo Bhava’ meaning the Guest is like a God. Therefore Atithi Satkar or Hospitality to the guest is of paramount significance of every Hindu family and should be performed with utmost devotion and care. Atithi Devo Bhava (Sanskrit: अतिथिदेवो भव) mantra has been derived from the ancient scripture named Taittiriya Upanishad which forms the code of conduct for the Hindu Society.

The physical emotional bond between the different members of a society is an important concept to live and practice the cohesion with one another. In the joint family system Parents, wives, children and brothers and unmarried sister all live together in the strong bondage and protection of one another. The eldest and senior-most in the family is usually the head of such family system. The youngest member of the family is normally nurtured and taught the value system of the family so that when he or she grows, they follow the chain and perform as per the customary practices of the Indian Civilization and Culture.

No other countries in the world celebrate as many festivals as India. There is hardly any fortnight in India which is barred of any festival celebrations. In India people from different communities and followers of different religions practice and celebrate different festivals. For instance, Hindus celebrate Deepawali, Holi, Makar Shakranti etc, the Muslims celebrate Eid, Bakrid etc., the Sikh celebrate Guru Parva or Birthday of Guru Govind Singh or likewise, Jain or Buddhists also celebrate their own festivals.
Looking upon the magnanimity of the population, and diversity at different spheres, one may notice that Indian Civilization and Culture has managed to keep the flock together and cohesive for their ultimate development and progress. In the above paragraphs, we have discussed just five points to show the varied numbers of different prevalent customs and traditions of Indian population dominated primarily by the Hindu community and their efficacy in the social linkage. We can explore and find out such more points which may be of equal importance in the social linkage.
CivilizationCultureFacts About Indian CultureIndian CivilizationIndian Culture
0
Share FacebookTwitterGoogle+ReddItWhatsAppPinterestEmail

The Eternal Fire at Ancient Mamleshwar Temple: A Historical Study

Modern Tradition and Culture of India: A Critical Study

5 Popular South Indian Temples that You Must Visit