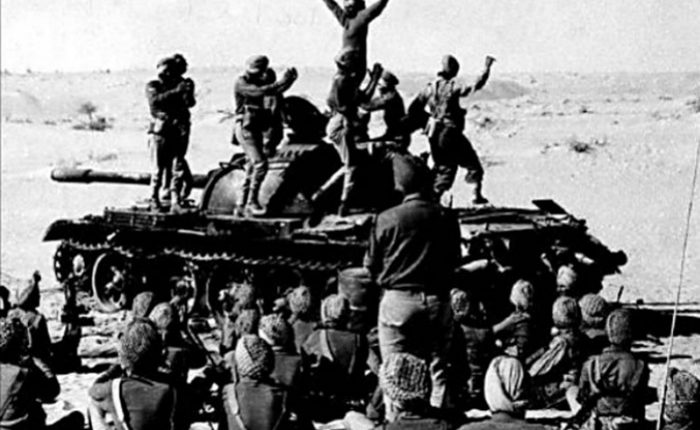 The Battle of Longewala was among the first engagements during the Indo Pakistani War of 1971. It was fought in the Western Sector of India.

The Battle of Longewala has become now an inspiring history and tale of grit, courage, determination, and valor to the people of India whose mere mention fills our hearts with a sense of pride and Superbia.

The 1971 Indo-Pak war is certainly one of the pride moment in the history of India which describes the valor of our military.

One could remember that as an outcome of this war, Bangladesh was liberated from the exploitative and oppressive clutches of Pakistan.

The war of 1971 was essentially a war between the forces of Bangladesh and Pakistan, where India intervened only when the crime and terror exerted on Bangladesh became unbearable for India.

Nearly nine million refugees were pushed through the borders of India from Bangladesh after a thorough brutal campaign of terror, murder, and rape by the Pakistani forces on the civilian population of Bangladesh.

India was in fact pushed into the war when terror at its border became unbearable and the rest of the world preferred closing their eyes to the sufferings of the people of Bangladesh. There was a uncountable mass exodus of refugees into India causing its resources to deplete and a huge loss.

The Indian Air Force had achieved magnanimous success on its Eastern borders causing its troops on the ground to move into Bangladesh freely and without any fear of stiff opposition from Pakistan. To counter these advances, Pakistan planned to engage India on Western borders which were never a scene of the ongoing war. Therefore so ensued the famous Battle of Longewala.

Recommended for You:
Pakistan Terrorism: As A State Sponsor Of Terror In Region
Appointment Of First Army General Of India After Independence

The Battle of Longewala

The Battle of Longewala was fought between attacking defenders and forces in Longewala’s border post, in the Thar Desert of the district of Jaisalmer of Rajasthan state in India.

The Longewala lays 6 Kms inside the Indian territory from the International borders of India.

In the annals of the history of Indian Military, the Battle of Longewala is a unique event where all the advances of the enemy were thwarted by the bravery of few men on the ground supported and thwarted by the Air Power.

the 23rd battalion of Indian Army comprising “A” company of Punjab regiment was commanded by major Kuldip Singh Chandpuri. He was commanding 120 men under his command.

On the fateful night of December 4/5th, the infantry brigade of Pakistan with a very large number of tanks and artillery power crossed over the borders of Western fronts of India and marched towards Longewala.

Major Kuldip with his meager resources had the option of either fleeing away with his men for survival from such a big contingent or hold out until some reinforcement comes from the Indian side.

Major Kuldip decided with the second option consistent with bravery and “Never surrender to enemy” attitude of the Indian forces.

The Battle of Longewala began.

Major Kuldip planned, articulated and used his all the assets under his command by deploying them very punitively and correctly to fight out the battle.

He channelized the best use of his strong defensive position and exploited the errors of his enemy in the best order to sustain.

The Pakistani forces were advancing in a totally unknown terrain. Their heavy vehicles were getting stuck into the highly porous and loose sand in the area making them vulnerable to move forward or backward.

This provided an opportunity to Major Kuldip to strike them at random with artillery power and hold on to the area till air support came from the Indian Air Force.

In the Battle of Longewala, Major Chandrapuri did play another clever option to fool the already stuck enemy. To stop the advancement of Pakistani forces, he put up barbed wire ahead of the anti-tank mines. This led to Pakistani side into thinking that the wires were indeed the starting point of personal mines. This caused to stop the Pakistani infantry from any further advancement to the Indian post.

The Pakistani tanks and heavy vehicles of armory were though entrapped in the unfavorable terrain but to fight with such a large column of artillery power the resources with Major Chandrapuri were very meager. He sent repeated signals to his command and control establishment for help. He was promised of the air support only at the dawn of next morning.

The task before Major Chandrapuri was to stop these forces to reach to his post. Therefore He preferred to a guerilla-like war by using hide and attack tactics.

In the air attack of the Battle of Longewala, one name which is often talked about is the name of Wing Commander Bawa popularly known as Wingco Bawa. It was he who had planned, guided and articulated the complete show from the Jaisalmer Air Force base which ended up with a decisive victory for India.

In the Battle of Longewala, the Pakistani side witnessed heavy losses and very low casualties at the Indian sides. The Indians caused heavy losses by managing their defenders’ advantages.

It is said that about 200 Pakistani soldiers were killed in the Battle of Longewala along with 34 tanks and 500 armored vehicles destroyed. On the Indian side, it was the meager death of two soldiers and loss of a jeep mounted with recoilless rifles.

The Battle of Longewala has been depicted to some extent in a Bollywood film named ‘Border’. In this film the starrer Sunny Deol has played the role of Major Kuldip Singh Chandrapuri, Jackie Shroff as the Wingo Bawa and Sunil Shetty as the BSF Bhairon Singh. The film provides some glimpses of the Battle of Longewala for the public at large to understand the nitty-gritty of the battle much easier.

Hope with this description, you got to understand an insight story of the famous Battle of Longewala which is indeed a symbol of pride for we commoner of India. Do let me know how do you feel about it. Please apprise us in the comment box.

5 Interesting Facts about Indian Culture That May Surprise You

Quotes on India In Praise That Will Fill You With Pride