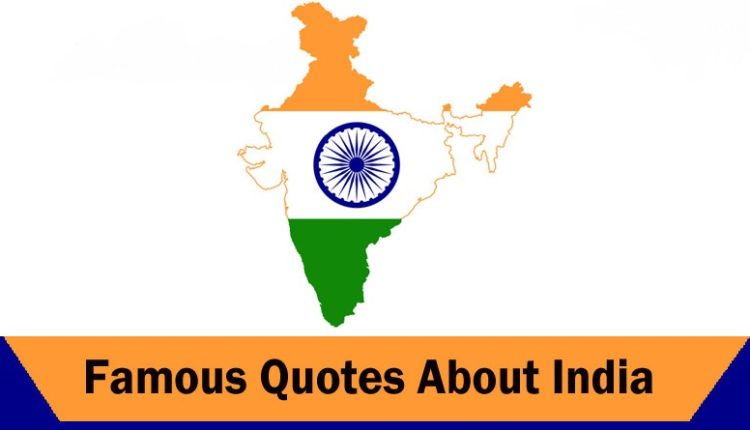 Quotes on India In Praise That Will Fill You With Pride

Various people and luminaries have Quotes on India in her praise. These quotes are a source of inspiration for many of us. Let us find out them.

Famous critics, philosophers, and historians have not quoted India and praised its culture, heritage, and glory out of love for this country, but it has happened because of the TRUTH and the real facts which can not be contradicted.

Quotes on India in Praise

Let us look at those Quotes on India in its Praise and refresh our memories.

“India is the cradle of the human race, the birthplace of human speech, the mother of history, the grandmother of legend, and the great grand mother of tradition. our most valuable and most instructive materials in the history of man are treasured up in India only.”

“We owe a lot to the Indians, who taught us how to count, without which no worthwhile scientific discovery could have been made.”

If I were asked under what sky the human mind has most fully developed some of its choicest gifts, has most deeply pondered on the greatest problems of life, and has found solutions, I should point to India.

“If there is one place on the face of earth where all the dreams of living men have found a home from the very earliest days when man began the dream of existence, it is India.”

Recommended for You:
India As A Country Of Golden Bird
Ancient Indian History Of Naming Bharat

6. Hu Shih, former Ambassador of China to the USA:

“India conquered and dominated China culturally for 20 centuries without ever having to send a single soldier across her border.”

There are few more important Quotes on India out of the thousands, which can be deliberated here and mentioned which attracts our attention obviously in praise of India. They are as follows:-

“So far as I am able to judge, nothing has been left undone, either by man or nature, to make India the most extraordinary country that the sun visits on his rounds. Nothing seems to have been forgotten, nothing overlooked.”

“There are some parts of the world that, once visited, get into your heart and won’t go. For me, India is such a place. When I first visited, I was stunned by the richness of the land, by its lush beauty and exotic architecture, by its ability to overload the senses with the pure, concentrated intensity of its colors, smells, tastes, and sounds… I had been seeing the world in black & white and, when brought face-to-face with India, experienced everything re-rendered in brilliant technicolor.”

“India has two million gods and worships them all. In religion all other countries are paupers; India is the only millionaire.”

“It is impossible not to be astonished by India. Nowhere on Earth does humanity present itself in such a dizzying, creative burst of cultures and religions, races and tongues. Enriched by successive waves of migration and marauders from distant lands, every one of them left an indelible imprint which was absorbed into the Indian way of life. Every aspect of the country presents itself on a massive, exaggerated scale, worthy in comparison only to the superlative mountains that overshadow it. It is this variety which provides a breathtaking ensemble for experiences that is uniquely Indian. Perhaps the only thing more difficult than to be indifferent to India would be to describe or understand India completely. There are perhaps very few nations in the world with the enormous variety that India has to offer. Modern day India represents the largest democracy in the world with a seamless picture of unity in diversity unparalleled anywhere else.”

The above Quotes On India which were told by the famous dignitaries of their time In Praise of India still hold the TRUTH and speaks volumes about its magnanimity.