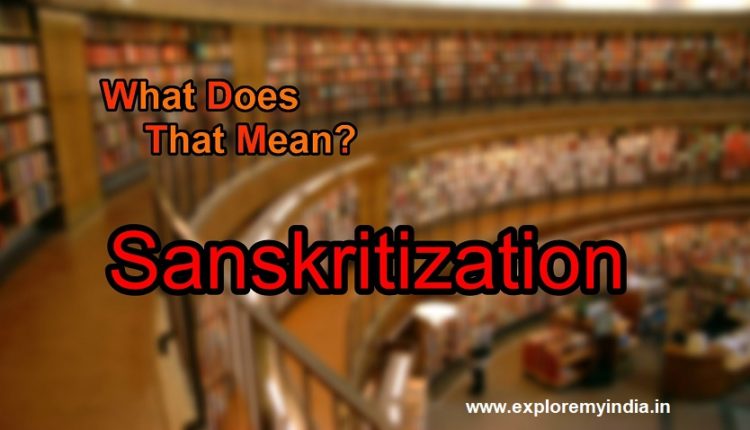 Sanskritization: The Process of Change in Indian Society

Many artists from the field of dance and music have rejected and embraced Sanskritisation at different points in history.

History and sociology textbook and lectures in schools and colleges in India perhaps miss out an essential part of cultural history. I say cultural history and not history because the concept of Sanskritisation is certainly not missing from mainstream sociology or history.

The well-known sociologist M.N. Srinivas has written extensively about it as a process of general social change in India. However, when we talk about the history of our culture, in terms of music and dance, the social change and historical transformations become uncomfortable topics of discussion.

Recommended for You:
Folk Dances Of India
Ancient Cultural Heritage Of India

What appears to, therefore, slip from the minds of students of history and sociology is the deep connection that Sanskritization has with the path that dance and music in India took during Colonization and the subsequent nationalist movement.

This connection is worthy of more than a mere cursory mention because it deeply transformed the practice and performance of music and dance in India entirely.

Sanskritization in India is a process by which lower castes seek upward mobility by emulating the rituals and practices of upper or dominant castes.

Srinivas defined it as a process by which “a low or middle Hindu caste, or tribal or another group, changes its customs, ritual ideology, and way of life in the direction of a high and frequently twice-born caste.”

Now what does all this have to do with music or dance, one might ask? Some of the most prominent names in the fields of music and dance have either adopted or rejected the concept of Sanskritization.

They did so at a crucial moment in history, arguably transforming either themselves or their art form or sometimes even both. These transformations are said to have more or less resulted in what we call Indian dance and music today.

Rukmini Devi, Balasaraswati, and M.S. Subbulakshmi – contemporaries deeply respectful of one another – are differently but inextricably tied to the idea of Sanskritization in India.

Rukmini Devi was one of the first women from a higher caste to practice and perform Sadir/Bharatanatyam.

She made many modifications to the dance form to purify it i.e. to get rid it of its erotica or sensuality, and the stigma of the devadasis.

Her undoubtedly monumental efforts to ‘revive’ the dance form led to a former low-caste dance form being practiced and performed by high caste girls.

In stark contrast, Balasaraswati outrightly rejected Sanskritization. She had complete faith in her own history and heritage as a Devadasi dancer. She saw Sadir as ‘perfect’ and requiring no modification.

She felt that the process of sanitizing (arguably Sanskritizing) as unnecessary, threatening to her art form and even vulgar.

For her, this process was a deadly threat to the existence of her heritage and dance, as she knew it. Her rejection of Sanskritization, in many ways, defined her and her dance.

Finally, M.S.Subbulakshmi had her own unique link with Sanskritization. Born into the devadasi tradition, she eventually shed most of her connections with her Devadasi past.

Her appearance and nature, her marriage to Sadasivam (who relentlessly pursued the goal of his wife being viewed in the socio-religious hierarchy as a Brahmin equal), her chaste rendering of Sanskrit ‘songs’, even the way she tied her sari – a madisar (nine yard sari worn by Iyers) made her an ideal candidate for social elevation.

She went through a complete process of the transformation. As T.J.S George, author of M.S’s biography points out and says that, “…Sanskritization was at work in the case of Subbulakshmi, helping her to convert prestige to rank”. So she got transformed and elevated.

These three masters of art were the burning examples of the link between Sanskritization, music, and dance.

We can safely conclude that it is difficult to understand India’s cultural history without examining the importance of social changes in society and observing how things amalgamated from lower to higher strata and vice-versa.

Courtesy to: An article by The Hindu on Sanskritization and culture dated 08 Nov 2013.