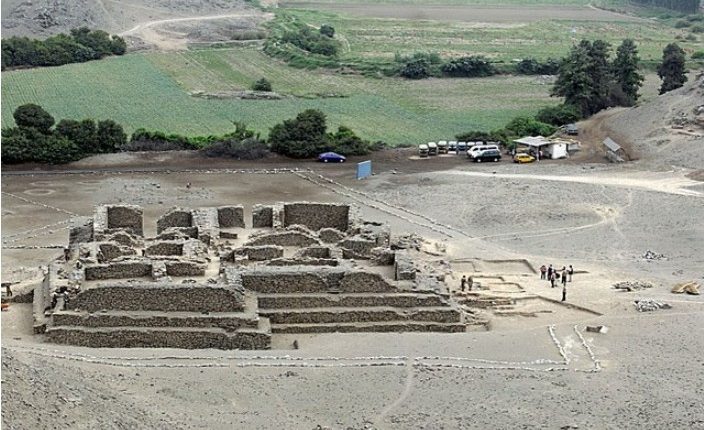 In Hinduism the Havan Kund is a sacred structure for burning fire to perform customary rituals, ‘Puja’, ‘Archana’, to please the deity for the well being.

In Peru, the Archaeologists have unearthed a temple, believed to be more than 5000 years old, at the site of famous El Paraiso, located near Lima. On the western edge of the Paraiso Complex is a temple which is described as: “A small stone structure which features walls coated in yellow clay and traces of red paint, is thought to be around 5,000 years old and has already been dubbed as the Temple of Fire.” This temple of fire is nothing but the Havan Kund which is used in the religious ceremonies in Hindu families.

It was discovered within the western wing of the main El Paraiso pyramid. The hearth or the ‘Havan Kund’ located in the newly discovered structure was used to burn ceremonial offerings. Marco Guillen, who led the team of researchers interpreted his findings and said, “The smoke allowed the priests to connect with the gods.”

It is established that the concept used in this archaeological finding is very much similar to the Vedic rituals done in Havan Kund (Yajna, where people light up the fire in a square shaped cube structure built with bricks and make offerings while chanting mantras, mostly to please a god/goddess and achieve a certain objective). This is also called as Agnihotra or Homa.

A larger version of a ‘Havan Kund’ Recommended for You:
Brahma Temple Pushkar: पुष्कर का ब्रह्मा मन्दिर
Ganga Ji Ki Aarti At Dashashwamedh Ghat In Varanasi
The Paraiso Fire Temple is a larger version of a ‘Havan Kund‘, with seating space for the pundits (priests) chanting mantras.

Archeologists say that the site is comparable in age to Caral, the oldest pre-Columbian site in the Americas that was inhabited between 2,600 – 2,100 BC. Caral is located some 200 kilometers (125 miles) to the north and is a UNESCO World Heritage Site.

The entrance, measuring some 48 centimeters (19-inches) wide, leads to a chamber measuring eight by six meters (26 by 20 feet) where shellfish, grains, flowers, and fruit were burned as offerings. The temple has four levels, with each one older than the other.

Vedic sacred fire ritual ‘havan‘serves as a link between man’s consciousness and the cosmic consciousness. Havan fire converts the physical components and all offerings made to the fire, into their ‘psychic’ components serving as homage to the deities presiding over the ‘havan‘. The ‘offerings’ made in the fire is known as ‘homa‘  in Sanskrit.

Probably from the Sanskrit ‘homa‘ that the English word ‘homage‘ is derived – though English etymological dictionaries trace the source to the word ‘homme‘ meaning ‘man‘.

Agni (Fire) is the first word in Rig Veda (which is the oldest text available). Almost all religions use light/fire to worship higher force or God. It can be in the form of agnihotra, lamps or candles.

Burning incense sticks is also practiced in many religions for meditations purposes. With this archaeological finding, it appears that offering in the burning fires was prevalent in the olden days of Peru also.

In Sanskrit, Peru means ‘Golden Mountain’ and ‘Paru‘ means ‘Paradise‘. Paraiso could have its roots in Sanskrit.

It appears that there is some connection with Peru from Havan Kund of Hinduism. May be the inhabitants of Peru during those olden days practiced ceremonies of Hinduism and that is why 5000 Years Old Temple of Fire (Havan Kund) is being discovered in modern times.

Dry Cell Battery: A Critical Analysis of Its Invention in ancient India

Sanskritization: The Process of Change in Indian Society